You are here: Home / Archives for Diary of the Dead

Diary of the Dead 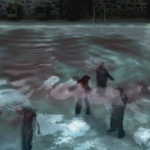 Diary Of The Dead: Terrible or Awesome? rafalor: Diary Of The Dead.  Worse than Land Of The Dead and much better than Survival Of The Dead.  My biggest complaint about this movie is that it’s supposed to be filmed like someone just documenting events but at the beginning we are told that the footage is edited and has music/sound added. We end up watching film students document … END_OF_DOCUMENT_TOKEN_TO_BE_REPLACED