You are here: Home / Science / Will the eclipse resemble a zombie apocalypse?

Get ready for a once-in-a-lifetime solar event: a near-total eclipse of the sun by the moon in North America. Although eclipses are somewhat common, occurring somewhere on earth every 18 months, the previous North American event happened 99 years ago. 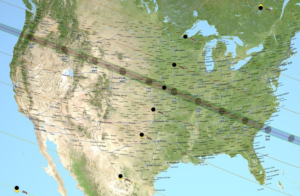 This eclipse will darken the sun for several minutes across most of North America and–briefly–emulate conditions similar to the zombie apocalypse. According to NBC News:

With two-thirds of Americans living within a day’s drive of the eclipse, some eclipse experts have anticipated that the weekend leading up to the August eclipse will see more travelers in the air, on the rails and on the road than any other time in 2017. That could present serious problems for those viewing the eclipse, even if they don’t have to travel to see it. And people who live inside the eclipse path but choose to miss the once-in-a-lifetime event will not be spared.

Earth’s final eclipse of the moon will happen in appropriately 600 million years, after which all life–including zombie walkers–will be fried as the sun expands before it dies.