You are here: Home / Archives for The Atlantic

'The Walking Dead': Less Action, More Conversation /via @theatlantic Does The Walking Dead want to be a drama or a thriller? And—perhaps more importantly—can it be both? Last week’s action-packed, character-light episode of The Walking Dead threatened to tip the show too far onto the action side at the expense of its overarching story. Fortunately, this week’s … END_OF_DOCUMENT_TOKEN_TO_BE_REPLACED 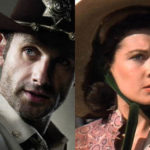 'The Walking Dead': Clint Eastwood Meets 'Gone With the Wind'AMC’s new series The Walking Dead is everything you’ve heard: the queasiest show on any television channel, anywhere; a well-written pitch-black comedy; and a revitalization of the zombie genre on the small screen. But while the gore’s gotten much of the attention, Frank Darabont’s adaptation … END_OF_DOCUMENT_TOKEN_TO_BE_REPLACED