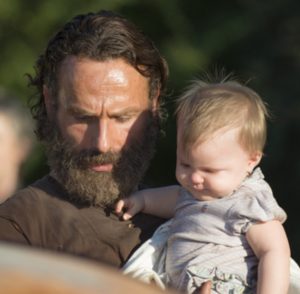 SHANE!  Holy cow Governor, didn’t see that one coming!  In what was an emotionally charged episode in which Negan tells Rick he just shoved his man tool down his throat and thanked him for it, we learn that Judith is Shane’s baby girl.  Rick expresses as much to Michonne while explaining why they needed to except Negan’s rule.

Rick was put through hell and simply doesn’t want to lose anyone else he loves.  There’s no doubt Negan has rattled Rick and his concern for family is first and foremost.  Is Rick still in there?  I’d say yes after Rick confronts Spencer for hiding weapons and Spencer gives it right back, asking Rick if others would still be alive if he’d had done things differently, mentioning Glenn by name.  Rick’s response is essentially, ever say anything to me like that again and I’ll break your jaw and knock your teeth out.  Oh, he’s still in there, but one has to wonder what Negan’s going to do to finally bring out Rick’s inner demons, which is never a good thing for those who unleash the beast. 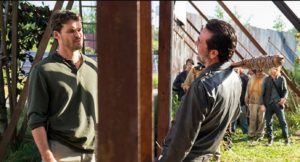 About the only laugh in the whole episode is when Father Gabriel appears out of nowhere to “creep this shit out of” Negan.  The good father saves the day as Negan starts asking after Maggie, digging a second grave to make it look like she died.  She’s clearly not in Alexandria, and we find out in a sneak peak for episode 5 that she’s at the Hilltop community.  We’ll find out more next week as the Hilltop gets invaded by the Saviors and Maggie looks to be a potential bargaining chip.

What’s going on with Daryl you ask?  Well, he’s doing what he’s told, but refuses to say what Negan wants to hear, “I’m Negan.”  He had an opportunity in the episode to “convince” Negan to allow him to stay during the episode, but just offers his feral stare when offered the chance.

This subdued Rick and Daryl are hard to watch for sure, but the subtle tones of defiance from Rick’s group are present.  From Carl standing up to Negan’s goons, to Michonne and Rosita’s rage, you can see the storm building as the groups morale can’t get any lower, or can it?  I sure as hell hope not, after the premier the introduction of King Ezekiel was uplifting, offering one of my favorite TWD episodes ever.  Since then, we’ve had two weeks of beat downs and it looks like the Hilltop is next on the hit list.