We’ve seen bits and pieces of The Walking Dead character Tara Chambler over the past few seasons, but that changes in this episode, which also serves as an introduction to the Oceanside community.  As has become common, the episode bounces between past and present, as we start with Tara washed up on a beach.  From there we finally catch up with Tara and Heath as they have come up largely empty on their scavenging trip.

Heath is still deeply troubled by the events at the survivor outpost and working through the new world he finds himself in, as Tara continues to try and stay upbeat and forge ahead.  While examining a bridge that had previously been a make shift camp, Tara inadvertently sets free a swarm of walkers.

The episode really starts bouncing around at this point, where we find Tara saved from being killed on a beach (how the hell did that happen?) and pulled to safety by Cindy, how had convinced a young member of the Oceanside community not to kill her at first.  Cindy pulls Tara to safety and leaves food and water, checking on her later in the afternoon.  Tara feigns being passed out still and follows Cindy back to the Oceanside community, where she observes the all women group going about their daily lives, which includes a large stash of weapons that might hint at how a war with Negan could happen later in the season or seasons.

Needless to say Tara is discovered and chased, at one point knocking out one of the Oceanside women, instead of killing her.  This, along with Cindy again intervening, seems to save her.  Surrounded, she’s taken and chained into one of the local houses.  Later that evening, she meets with the community leader Natanya and a few others for dinner.  Natanya offers to let Tara stay, which would solve the fear of anyone discovering the community.  Tara, asking why there are no men, soon finds out that they were all killed while fighting with another group.  They then fled their home and settled here, and were desperate to keep it hidden and safe from anyone, which is why they usually kill people wandering too close. 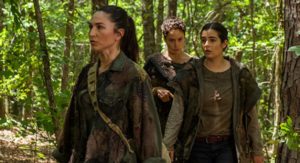 Tara also finally confides that she’s from another community, Alexandria, discussing the recent raid on an outpost that had to be done to survive and that while both groups had to do what must be done, they could start to work together.  Natanya finally relents and agrees to let Tara go back to see how this partnership might work.  In the end, this was a ploy to get Tara out of the community and away from Cindy so they can kill her.  Tara figures this out and flees, discovering in a struggle against Beatrice that the group they attacked at the outpost was the Saviors, the same group that killed all their men, and that it was just one outpost, that more would come and do the same thing to Alexandria, which is why they couldn’t risk letting Tara go back.

Tara is again being saved by Cindy, who makes her promise not to talk about the community.  Cindy helps Tara back to the bridge where she lost Heath to try and piece together what happened to him. After a few scares, she realizes he made it back to their vehicle and was, hopefully, still alive.  Tara begins her way back to Alexandria, staying in an abandoned tourist store that offers her shelter for the night, while also finding a doctor bobble head for her girlfriend back in Alexandria.

Tara makes it back to discover her girlfriend is dead, along with Glenn and Abraham, as the reality of the Saviors sinks in.  She’s presented with a couple of opportunities to open up about Oceanside, but keeps her promise and doesn’t discuss the new community.  Overall, this was a typical character building episode that can sometimes simply drag out too long.  I very much enjoyed the episode and look forward to watching Tara and her fun quips and indifference to the world of the dead as the season goes on – even if we don’t see her again for another 6 episodes.  I have a feeling though, she, and the members of the Oceanside community are going to play a huge part in the upcoming war with Negan and the Saviors…