You are here: Home / Featured / The Walking Dead Season 7, Episode 2, The Well 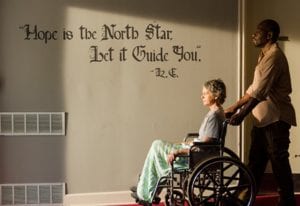 Ok, so I LOVED this episode and the new character King Ezekiel.  I’ve admittedly not read the comics and wasn’t sure of what to expect, outside of a kick ass tiger.  So it was a pleasant surprise to see such a wonderful new, complex character enter the fray.  Jesus was quickly introduced last year and faded in and out, almost disappointingly so, but I don’t think that will be an issue with the King this year.

I almost felt like I was next to Carol in the wheel chair as she’s introduced to the King with Morgan and the court jester looking on.  At first you think dude is completely out of touch, but as the show goes on and we’re introduced to Ezekiel, you begin to understand what he’s created and why. 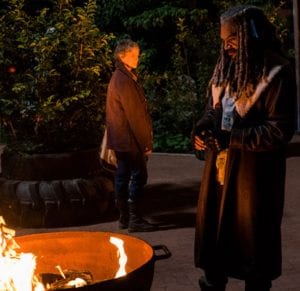 The scene where Ezekiel intercepts Carol before she attempts to leave the Kingdom has to be one of the best character interactions I’ve ever seen on the show.  We learn that Ezekiel knows full well that his new world might seem crazy, but how crazy can it be if it helps him and the others cope with what the world has become.  He also begins to finally reach Carol and let her know there are people there that care about what happens to her.  When she asks why, he simply tells her “because it makes me feel good.”  You can’t help but feel his sincerity and instantly warm to the man with the tiger.  He’s not nuts and he may actually be onto something.

So while I paint this fun little picture of the Kingdom and King Ezekiel, there’s also a dark layer of the outside world that’s being kept from his royal subjects, as Morgan soon learns.  During the course of the show, Morgan takes a few outside trips with select members of the Kingdom to harvest wild pigs that are getting fat feeding on…oh yeah, walkers! 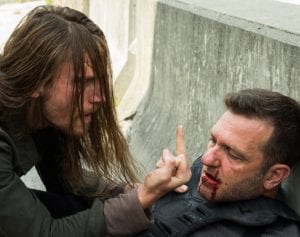 On his final trip out, Morgan learns that King Ezekiel has a deal in place with the Saviors to supply pigs in return for being left alone.  Embolden, a typical Savior jackass runs his mouth and is put in his place by one of the Kings best men, only to be forced to take free shots to the face in a show of submission that Negan demands.  A nice reminder from the show that the Saviors and Negan are still here to crap on your day.

The show ends with Morgan escorting Carol outside the Kingdom to a house she first saw at the beginning of the episode.  She does a little spring walker cleaning and begins to make the house her own when she hears a knock at the door, followed by a giant roar.  She opens the door to King Ezekiel telling her she really needs to try one of his pomegranates.  One has to wonder if the King isn’t a little bit taken with Carol?  Regardless, I can’t wait to see how this character impacts The Walking Dead East!  If you haven’t started Season 7 yet, skip episode 1, you know who dies, move straight onto episode 2!