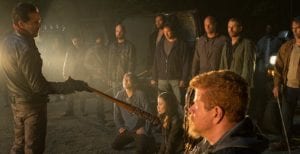 So…holy shit…it happened…not once, but twice.  If you’ve not watched the premiere yet, stop reading…

Ok, you were warned…apparently, killing one character wasn’t enough, the show had to take two characters from us in the premiere.  I’m just gonna say it, bitch nuts!  I loved Abrahams character, but as he was finding peace in the screwed up world that we call The Walking Dead, you started to wonder if fate (and the writers) had it going just a little too smoothly for Abraham.
And if that wasn’t bad enough, Daryl commits a “major no no” and goes after Negan after he kills Abraham, hitting the deranged leader and knocking him down.  The response?  Negan introduces Glenn to Lucille.  I’m going to be honest, that might have been the most difficult thing I’ve ever watched – movie, tv – fucking ever.  I almost stopped watching the show after watching Glenn sitting there with one eye popping out of his head trying to tell Maggie he loves her.  I’m not going to post the image here, but it’s still stuck in my head.  I was upset last season when I thought they killed Glenn, I guess that was the shows way of making his death a little less painful – kind of like having an old dog you know is going to die, die.  Stills sucks, but you knew it was coming, so it’s easier to accept. 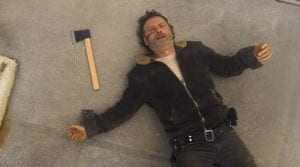 This all plays out through Rick’s hell ride with Negan, where Rick has flashbacks and learns that his axe is really Negan’s axe – the hard way.  And just when you think shit can’t get any worse, Negan takes Rick back to the group and still doesn’t quite get the vibe he wants from Rick.  So he forces Carl to come on down, puts a belt on his arm and tells Rick to cut it off to make sure he understands his new world.  So having a son of my own, this one hit close to home and I was having a hard time watching – so fucking twice in one episode did the writers have me squirming – until at the last moment Negan backs off and stops Rick from cutting Carls arm off.  Negan then simply walks off, letting the group know he’ll be at Alexandria in a week to collect.  As the all the Saviors disperse, you see the group beginning to process their new world. 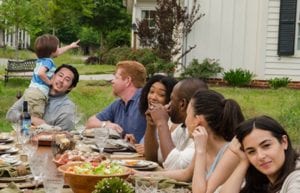 As the group tries to collect themselves, Maggie wants war, but is convinced to take Glenn and Abraham back to bury.  The show ends with a heart breaking shot of what could have been with a family style community dinner table shot at Alexandia.  It was a tough episode to watch – I mean it puts the Red Wedding to shame – and while I’m not going to stop watching, it’s a strong reminder that anyone, at anytime, can meet their end.

So it looks like King Ezekiel is on the next episode and I hope that this character breathes some life back into the show, cause it’s low, low, low right now folks.