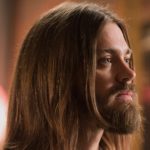 Help me Jesus!  That might have been a better title for this episode 😉  I really enjoyed his addition to the show last year and he continues to tease as a fascinating character that we just don’t see enough of in the series.  Kind of like King Ezekiel…

Anyway, we get a huge Jesus fix in episode 5 and find Maggie and Sasha picking up the pieces at the Hilltop Community.  Gregory basically wants Maggie gone as he’s worried about the Saviors finding out about their little arrangement and is dismayed to find out that there are “hundreds” of Saviors.  The Hilltop doctor wants Maggie to stay, but Gregory quickly dismisses that over objections from Jesus.

Later that night, the Saviors setup a little surprise for the Hilltop Community, opening the gates and playing loud classical music in a locked pinto that keeps attracting Walkers.  Jesus and Sasha start clearing walkers while trying to deal with the car, until Maggie shows up with a John Deere tractor and flattens the car, killing the sound and letting the group get control of the situation.  We later learn that it’s not the first time Maggie has gone kong on a car, but I’ll let you watch the episode to get the background on that.

The Saviors return the next day to remind Gregory and the group that they’re in charge, questioning Gregory about the last outpost getting wiped out.  Simon delivers the message in his special way and lets Gregory know that the Saviors had planned on cleaning up the walker mess, and is somewhat surprised the Hilltop Community did it on their own, to which Gregory lets Simon know the Saviors have been great teachers.  It gets pretty thick, and Simon asks if Gregory is holding out, to which Gregory admits yes and takes Simon to the closet where they had hidden Maggie and Sasha.

It’s clear as the Saviors leave that Jesus intends to take a more proactive role for the community and has his sights set on a new potential leader in Maggie.  It will be interesting to see how Gregory responds to this as the season wears on. 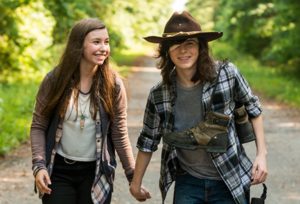 Meanwhile, back at Alexandria, the group is still trying to deal with the new arrangement with the Saviors while Carl wants no part of it.  He’s intent on killing Negan and really doesn’t seem to care what happens to him.  He ends up joining Enid on a trip to the Hilltop to check on Maggie, and there are some good moments between the two, especially when Carl finds roller skates.  But Enid soons discovers that Carl didn’t come to protect her, he came to find Negan.

As noted in an earlier post about Carl’s future, there has been some speculation that this might be the last season for Carl in the television series (he’s still going strong in the comics) based on a tweet from the actor real life father and the fact that Daryl is currently paralleling Carl’s torture storyline at the Saviors camp.  This wouldn’t be the first time the show took a major shift from the books and it has the social dead worked up hard core.

To complicate the storyline, Sasha asks Jesus to find out where Negan lives and we see him hopping into the back of a truck headed for Negan’s compound at the end of the show, only to have Carl pop out and say hi.  Shits about to get real!